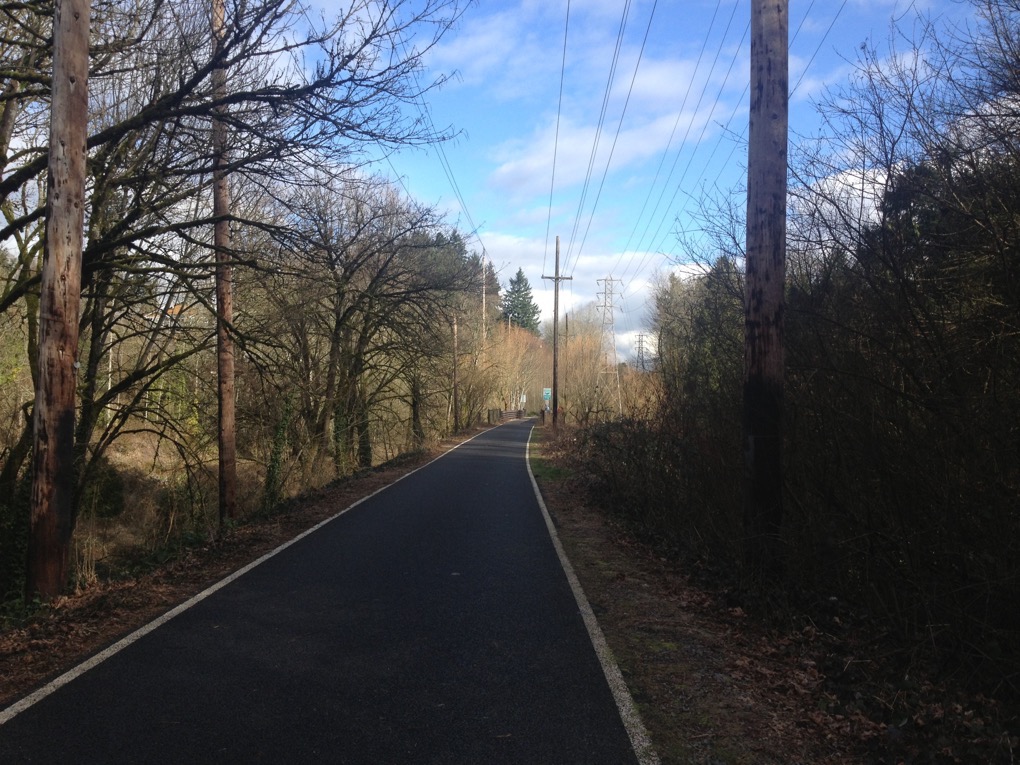 Springwater Corridor trail[/caption] Bike the equivalent of a half marathon on the first 13.2 miles  of 21.5 of the Springwater Corridor Trail. The trail starts at SE 4th Avenue and SE Ivon Street and ends on in Boring on Clackamas-Boring Hwy. No. 174 and Se Richey Rd. You needn’t worry about cars, the Springwater Trail is closed to any motorized vehicles.  Don’t forget water, snacks, front and rear lights and a helmet. Begin your journey with a scenic view of Portland’s downtown on your right, across the Willamette River. The trail will take you through the vibrant Sellwood neighborhood. Stop by Farmhouse Antiques at 8028 SE 13th Avenue.  Turn left onto SE Spokane, the street that corresponds with the end of Sellwood Riverfront Park. Make another left onto SE 13th, and the shop will be on your right. Head back on the trail with illusions of baked cinnamon French toast with a caramel pecan topping as motivation. Mehri’s Bakery and Deli is at 6923 SE 52nd Avenue. You will have biked well over 6 miles at this point. From the trail, turn left onto SE Harney Drive, then another left onto SE 52nd Avenue. It’s on your left, immediately after SE Bybee Blvd. To return to the trail, go south on SE 52nd, turn left onto SE Harney, and right onto SE 55th. [caption id="attachment_14520" align="alignleft" width="273"] 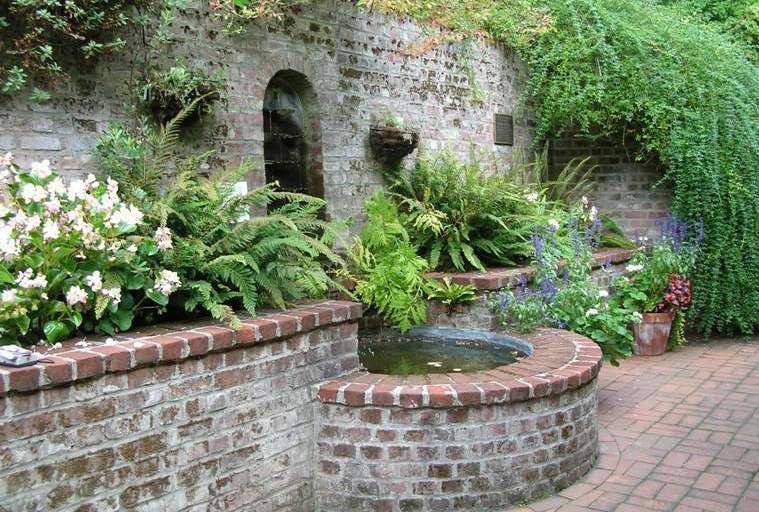 Leach Botanical Garden[/caption] In 4 miles, you will get to experience the magic of Leach Botanical Garden.  Who wouldn’t want to go to a garden that was originally named ‘Sleepy Hallow’ by its original owners, Lilla and John Leach? It was founded in 1931, expanding as the Leaches went on worldly trips to collect plants. Forty years later, Portland Parks Bureau acquired the property. [caption id="attachment_14519" align="alignright" width="253"] 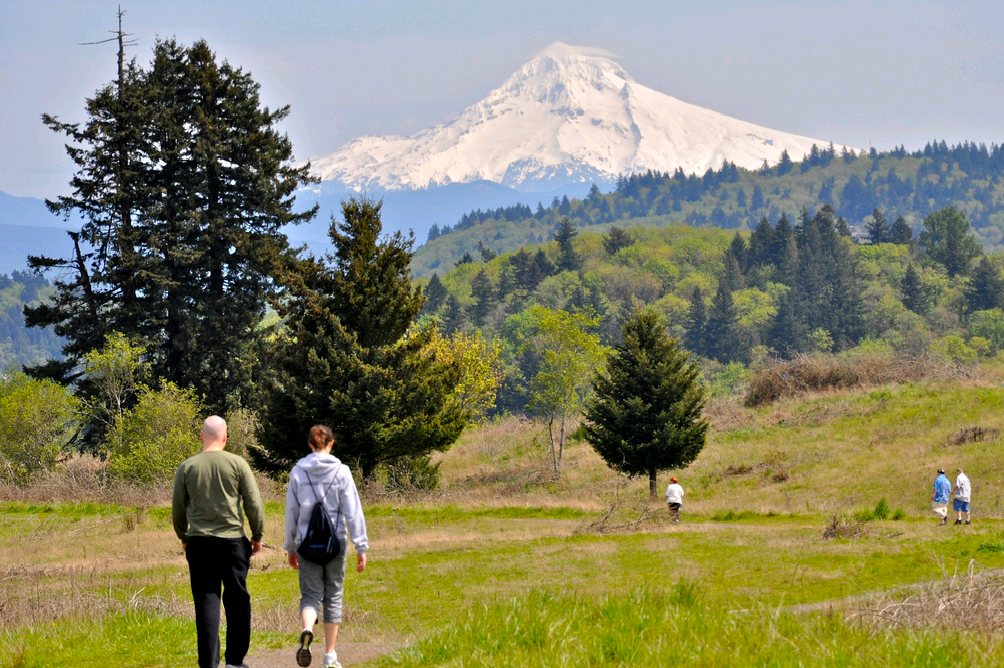 Mt. Hood view[/caption] Leach Botanical Garden is open Tuesdays-Saturdays 9 a.m.  to 4 p.m. and Sundays 1 to 4 p.m. Bikes aren’t allowed on trails, so find somewhere to lock it up. Admission is free, but contributions are greatly appreciated. How to get there: Turn right onto SE 122nd Ave. It will be on your right after SE Foster Rd. [caption id="attachment_14518" align="alignleft" width="254"]

Johnson Creek[/caption] In less than a mile, you will come to Powell Butte Natural Park. It is the second largest park in Portland, after Forest Park. The area is an extinct cinder cone volcano and there are 608 acres to explore. Allow yourself to feel small among the towering Mt. Hood views.  You can either explore the park and then bike back to Portland, or follow the directions below to take the return trip on Trimet. One block after 145th Avenue, turn left into the park. Continue straight onto Wild Hawthorn trail. Turn left at the fork, then continue straight. Keep right at the next four forks until you hit SE 162nd Avenue. Take a left onto SE 162nd, turn right onto Johnson Creek Trail, turn left on SE Anderegg Dr., turn right onto SE Lillian Way, take a right onto SE Naegeli Dr., then a left onto SE 174th Avenue. Board the #9 Trimet bus on 174th and Powell towards Portland for your ride home. Renaissance Homes is an award winning Street of Dreams custom home builder specializing in green building for the Portland market. Visit our Design Studio to personalize your next home. Photo credit: K.KendallonFlickr, Leachgarden.org [caption id="attachment_14522" align="aligncenter" width="706"] 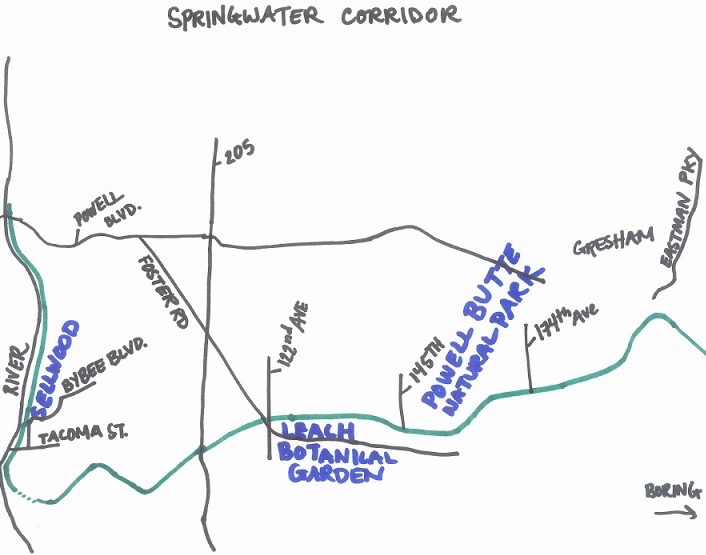